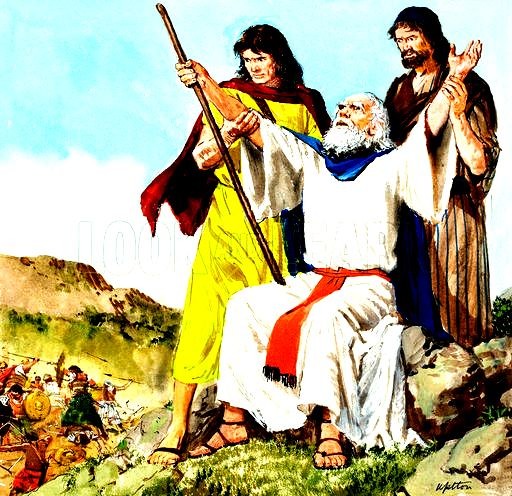 BEWARE OF THE SPIRIT OF AMALEK

BEWARE OF THE SPIRIT OF AMALEK

Sometimes our tiredness is not a natural tiredness. Sometimes it has a demonic source. And we must be quick to recognize its source and strategy to derail our destinies in order to deal with it swiftly and victoriously.

This is not something to play with. Your future and possessing your inheritance depends on it.

In Exodus 17:8-16 Joshua and the Israelites are fighting against a tribe called the Amalekites, while Moses is on top of a hill interceding with the staff of God. As long as Moses kept his hands held up, Joshua prevailed, but whenever he lowered his hands, the Amalekites prevailed. Moses hands grew weary and tired, and Aaron and Hur had Moses sit on a stone, while they held his hands up and steady until Joshua had overcome the enemy with the sword by sunset.

Verse 14 says that God would blot out the memory of Amalek – they are no longer a tribe today. But then in vs16, it says that the Lord will be at war against the Amalekites from generation to generation. So we’re talking about a spiritual war here now. Amalek means warlike. The Hebrew root is “amal” which means: to toil; wearing effect; pain; wickedness; sorrow; wearisome; trouble; mischief; etc.

We need to realize the tiredness Moses felt was not just a natural tiredness. Moses was feeling the spiritual effect of the demonic principality of Amalek that operated through this tribe. It was spiritual warfare. This spirit was trying to wear down Moses so he would give up on his posture of intercession for Joshua and the army.

Thankfully, Moses had Aaron and Hur to assist him. If you remember Amalek’s strategy in Deuteronomy 25:17-19 was to pick off and take out all the Israelite stragglers that were weary and worn out, and consequently lagging behind.

Amalek’s strategy is to wear down, tire out, weaken, and pick off the people of God to keep them from the destiny of their Promised Land inheritance. The tribe of the Amalekites may have descended from Esau, the grandfather of Amalek, who sold his birthright for some bean soup, because he was “weary.”

If you remember, King Saul had been given instructions by the Prophet Samuel to completely annihilate them because of this, but Saul disobeyed and lost his kingdom and his life.

This is a major demonic principality that we cannot ignore. It’s strategy is still the same: create passivity – to wear down and wear out the people of God until they lose their posture of prayer and faith in the Spirit, and then subsequently make wrong decisions and choices regarding their destiny and inheritance, and possibly be even demonically influenced to a place of disobeying the Word, or instructions God has spoken to them about their future.

But we are not ignorant of the devil’s devices and strategies. SO LET THE WEAK SAY: I AM STRONG!!!

Father, in the Name of Jesus, we come against Amalek and any of its influence, and we say that WE ARE MORE THAN CONQUERORS through Jesus Christ who loves us and is now at the right hand of the Father making intercession for us. We say we resist weariness, tiredness and passivity. And we say that we will be and stay strong in 2014 – strong in the Lord and in the power of His might on a fast-track fulfilling our destiny.

And Father – give us genuine Aaron and Hur relationships that will help lift up our hands in the battle so we may see the glorious victory.

And we say NO WEAPON FORMED AGAINST US WILL PROSPER!!!

We say like the Apostle Paul in Ephesians 1, that the same mighty strength and power of the resurrection and ascension of the Lord Jesus Christ that our Father in Heaven released 2000 years ago is now at work in us.

And WE DECLARE THAT AMALEK IS DEFEATED IN OUR LIVES!! Amen! Let it be so!