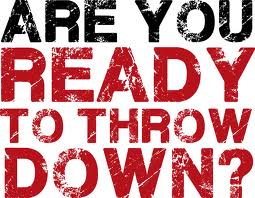 NEXT GENERATION PROPHETIC THROW DOWN

NEXT GENERATION PROPHETIC THROW DOWN

“See, I have this day set thee over the nations and over the kingdoms, to root out, and to pull down, and to destroy, and to THROW DOWN, to build, and to plant.” Jeremiah 1:10 (KJV)

Gods speaks here to a young man named Jeremiah that He had called him to be a prophet to the nations even before he was born, and that he must represent the Lord and be His voice to that generation.

When Jeremiah expresses his inability to do this because of being so young, God touches his mouth and says He has given Him the words to speak, and commissions him for the task. He goes on to lay out his prophetic assignment: root out, pull down, destroy, throw down – then build and plant. That’s some serious stuff.

No instructions here to prepare for a future TV ministry peddling green prosperity handkerchiefs, prophetic prosperity soap or miracle spring water. No – he’s about to challenge the rampant, unrepentant idolatry of God’s covenant-breaking people. Not a good way to grow your mailing list.

God is raising up a new generation in America. A generation of young people where a radical prophetic remnant is sensing a similar call to that of Jeremiah. They may not have much experience yet because of their youth, but God is touching them in a powerful way and speaking to them what is in His heart.

And it soon will become like “a fire shut up in their bones.” They are tired of religion and have a fresh vision of what God desires to build and plant for His church and Kingdom in this generation

They want to see the real deal.

Of course this always creates conflict, because the young Jeremiah’s are challenging the status quo to change, and the status quo is not happy about it. They are very content where they’re at.

This is where it will take apostolic fathers who recognize that change is in the air, to embrace the Jeremiah’s with love, and impart wisdom to them concerning the transition season, so that their passion and purpose can be maximized in successfully seeing a new wineskin emerge in their generation.

Without connection and relationship with apostolic fathers, the generational disconnect will be greater, and some of these Jeremiah’s will find themselves experiencing the same kind of rejection and terrible abuse that the prophet went through.

And this Kingdom relationship will create a genuine partnership with these Jeremiah’s so that it will not only be about rooting out, pulling down, destroying – but ultimately about achieving the end result of Jeremiah’s commission which is building and planting.