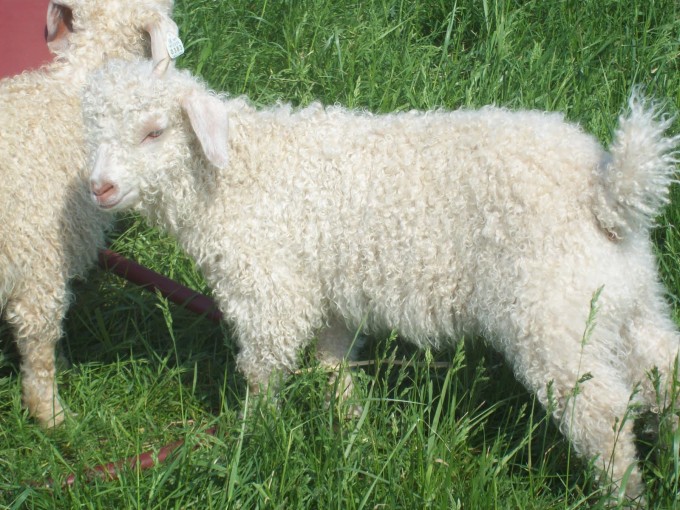 The following are the biblical descriptions of what our post-ascension King of Kings and Lord of Lords Jesus Christ now looks like:
His head and his hairs were white like wool, as white as snow; and his eyes were as a flame of fire… Revelation 1:14

As I looked, “thrones were set in place, and the Ancient of Days took his seat. His clothing was as white as snow; the hair of his head was white like wool…Daniel 7:9

Notice, it doesn’t say He is a white Jesus. The text says the hairs on His head were white like WOOL -as white as snow. Now, it could just have said to start with “white as snow” – and that description would have sufficed to know His hair color.

But it says first that it was “white LIKE WOOL.” Isn’t that possibly saying something about His HAIR TEXTURE? I have added a sheep with white wool. Looks like sheep wool has some – or actually a lot of “natural” curl to it.

Again in Daniel’s vision, he sees Him with “white as snow” clothes on, but, the hair of His head WHITE LIKE WOOL. Very interesting.

Revelation 1:15 (NIV) says “His feet were like bronze glowing in a furnace…” That is definitely not “white skin.” That is the description of the skin-hue of the ascended Jesus. Bronze can be a metallic type color of different shade of brown with possibly yellow gold mixed in. Christian scientists who study genetics say that the first Adam was most likely this color. Why? Because he would have had to have mixed genes to produce all the hues of human kind from white to yellow to red to brown to black. If the first Adam was white, his gene pool would not have been able to do that. The Last Adam – Jesus – He is the Saviour for all races – and He is the federal head of a new race – a new creation. Interestingly, his skin color is also similar to the first Adam.

Exodus 12:38 tells us a “mixed multitude” came out of Egypt. They were mixed Hamitic and Semitic (Afro- Asiatic). Remember Moses was married to Zipporah – a black Ethiopian wife. Jesus descended from Shem – he was Semitic.

Semitic people speak Semitic languages. Interestingly enough, the Ethiopian languages of Tigrinya, Amharic and ancient Ge’ez are also considered southern Semitic languages with many similarities to Hebrew and Arabic. And last time I checked, Ethiopia was definitely in Africa.

So Jesus the Man on earth would have most likely had a Semitic brown-hues complexion, and curly dark hair. Jesus the ascended Saviour and King is described with hair WHITE LIKE WOOL. The word of God emphasizes this description by revealing it in Daniel and Revelation.

You say, is this really important? Well, The Holy Spirit evidently did to have it recorded this way. This fantasy of a blue-eyed, Scandinavian-looking Jesus has to stop. Sorry my Scandinavian brothers and sisters. The Man Christ Jesus on earth didn’t look like that. And we may get the shock of our lives when we meet the ascended Christ. He may not be anything like we have pictured Him. But thankfully we do have a description in Scripture.

I can hear somebody saying – so you think Jesus has a pure white “natural” in heaven. Not certain. Just going by what the Word says. Something to think about, isn’t it?

My point is, that I’m tired of people saying – oh, He’s the white people’s Jesus. Or foolishness like Jesus was white. That’s ignorance on display.

How many young men and women of color has the enemy lied to – and kept from believing on Christ because of this white, blue-eyed blond hair Jesus nonsense?

Can you imagine if Malcolm X had heard an accurate presentation of Christ when he was in prison, rather than a distorted one? Can you imagine what an incredible radical prophet of God he might have been?

Now this statement is not meant at all as any slight to his valuable contribution to the struggle. But only to think about what may have happened if he heard the right message. The wrong message had him running to the Nation of Islam, rather than the Kingdom of God.

Why do I write posts like this? Because I want us as believers TO THINK. And to think how our presentaton of Jesus Christ may affect the eternal destiny of many.